In Nepali Everest is called Sagarmatha, that is how this national park is named as Sagarmatha by the name of everest in Local language.

The outstanding features at Sagarmatha National Park such as Mount Everest(8848m), and other peaks, deep gorge, longest glaciers khumbu has made Sagarmatha National Park most beautiful masterpiece of nature all around the world. The outstanding landscape, rich flora and fauna, wildlife, birds, culture, tradition, Wide range of Mountain peaks can make everyone satisfied.

Activities in Sagaramatha national park or in Everest region

To reach to Sagarmatha National Park you have to take a flight from Kathmandu to Lukla which is around 30 minutes and then you have to trek onwards from lukla to small village Phakding or all the way to Monjo (national park entrance point). Talking about the main activities, sagarmatha National Park offers you the activities such as trekking, mountaineering and exploration of local Sherpa community. Major Trekking and Mountaineering in sagaramatha national park includes;

Everest Base Camp Trek is one of the most popular trek in the world which has been also the dream of thousand of trekkers. The elevation of Everest base camp is 5364m (17600m). During the Everest base camp trek it offers you the beautiful scene of nature and 4 eight thousander mountain peaks out of 6; Mount Everest (8848m), Mount Lhotse (8516m), Mount Makalu (8481m) and Mount Cho Oyu (8201m) and other thousands of peak can also be seen such as Mount Amadablam, Kongde ri, Kusum kanguru and Thamserku. On the everest base camp trek you will get the chance to climb up Kala Patthar where you can see the appealing view of the world highest mountain i.e. Mount Everest. During the trek you will walk along the famous Dudh koshi River and Imja river valley and also get chance to explore the Buddhist monasteries and the culture of local Sherpa people. Monastery at Tengboche is famous and happening monastery among dozens of monasteries in the region.

Jiri Gokyo Everest base camp trekking is one of the most adventurous hikes in the region on the historic trail of Everest Region. The trekking trail is well facilitated with multiple numbers of tea houses and luxury hotels from where you can watch eye appealing views. This trail can be satisfactory trail to those who loves to walk near the beautiful snow capped mountains and average physical condition is enough for this trek. The trek starts from the city which is called jiri where the landscape is similar to of Zurich, Switzerland. From jiri you will be trekking towards to Namche Bazaar which is also called the hub of Everest region. From Namche you will be heading towards to Gokyo lake trail and later after the trek over chola pass it connects to lobuche. And on the trail to Everest Base Camp you will be walking by the famous glacier of the region i.e. Khumbu glacier and reaching to the EBC it amazes you with wilderness and high mountain ranges.

Everest three high passes trek is one of the most appealing treks in the trail of everest in the beautiful Himalayas of Nepal. During the trek you will be passing through the Renjo la pass (5345m), cho la pass (5420m) and kongma la pass (5171m). During the trek it offers you the magnificent views of high mountain ranges such as Mount Everest(8848m), Mount Makalu(8463m), Mount Lhotse (8516m), Mount Cho Oyu (8201m), Mount Amadablam (6812m), Mount Pumori (7161m), Mount Kangtega (6782m) and many others peaks which will definitely takes your heart away. If you are looking for adventure trekking trail and challenge yourself at Everest Region of Nepal then Everest three high passes trek will be perfect choice for you.

Arun valley is considered as one of the most versatile trek in the Himalayas of Nepal in everest region. This trek will offers you the beautiful valley along with the peaceful river flowing by which can make your body fresh and give energy to walk. It also offers you the beautiful eye-catchy views of mountain ranges such as the highest mountain peak of the world Mount Everest, Mount Makalu, Mount Kanchenjunga, Mount Barunse, Mount Amadablam, Mount Nuptse and many other eye-appealing snow capped mountain ranges. This trekking route can give you the experience of the wildlife, 800 species of butterflies, 650 species of birds and multiple varieties of flora and fauna of Makalu-Barun National park as well. If you have good physical fitness and stamina and have desire of witnessing the high mountain ranges with your own vision then we recommend you this EBC Arun Valley Trek.

Gokyo ri trek is ideal trekking package to view the Everest in short days and can be beneficial to those who have busy schedule and have desire to trek for the short period of time. In this trek, you will be walking around an elevation of 5000m above the sea level within the Sagarmatha National park and can witness the eye-appealing view of wide mountain ranges including Mount Everest, Mount Makalu, Mount Lhotse, Mount Cho OYu and you can also see the Ngozumpa glacier which is one of the biggest glacier of Nepal Himalayas. Gokyo ri trek is a short and easy trek in Everest to see outstanding view of Mount everest herself.

Everest View trek will offers you the best scenery of the Everest region in short span of time. During the trek you will be walking through the rhododendron forest, pine forest and crossing rivers and you will be visiting and sightseeing of museum of Sagarmatha National park at Namche which offers you to learn the culture, nature, wildlife and history of mountaineering in Everest Region. Everest view trek also offers you an opportunity to explore the culture, tradition, language and lifestyle of local Sherpa community. During this trek, animals such as mountain goat, red panda and snow leopard also can be seen.

Island peak is also known as Imja tse which is at an altitude of 6189m from the sea level. In the recent years, Island Peak Climbing is being popular because it offers an exceptional scenerary of Chhukung valley, imja valley and Khumbu region as well as high and wide mountain ranges. During island peak climbing you will also get a chance to explore the Everest base camp. During this trek you will also get chance to explore the Sherpa’s culture, tradition and lifestyles and you will get the Panoramic views of beautiful snow capped mountains including the highest mountain peak of the world Mount Everest and others such as Mount Lhotse, Mount Amadablam, Mount Nuptse and Mount Thamserku. Basic knowledge of climbing skills and use of simple climbing equipment is required while climbing island peak. Mount Makalu is close on sight from this peak in Everest region. 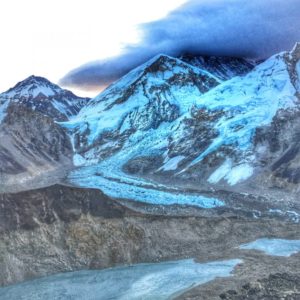 At sagarmatha National Park you can find 193 species of birds and some of them are snow Danphe (National bird of Nepal from peasant family) pigeon, snow cock, impeyan pheasant, Himalayan griffon, lammergeyer and many others.

Accommodation for your trip to Sagarmatha National Park