Manaslu is a 8th highest mountain of the world and trekking to Manaslu base camp is appealing reason for trek to samagaun; which also can be called as Manaslu base camp trek, Sama village trek or pungen monastery trek. Very few people do this specific trek alone, whereas 100s’ of trekkers do manaslu circuit trek, passing through this village. Manaslu Circuit trek with Tsum valley is famous circuit trekking in Nepal. Manaslu circuit trek goes over the famous larkey pass. Manaslu Tsum Valley trek is a remote trek in Nepal and also called restricted region trekking.

View of the mountains from Samagaun

Samagaun is one of the beautiful Himalayan village, on the lap of mountains like Naike peak, Manaslu and Mount Himalchuli; from the right. when you see from the side of Samdo village,  Samagaun has a picturesque settlements with more than 200 households. The houses that are thatched, are beautiful but these are the local houses. You will see the houses with RCC/modern houses and these are mostly Hotels, lodges and tea houses.

Tourism in Manaslu region is getting more and more advertised, as an alternative trekking trail of Annapurna circuit trek, that’s why more tourist/trekkers are attracted towards this restricted trail of samagaun village. Samagaun is under the lap of 8164m/26615 feet high Mt. Manaslu. This M shaped mountain is called Killer Mountain and stands as eights highest mountain of the planet.

Today is relaxing day, being here for the second night (as acclimatization day) at the village of samagaun, making more fun with guest/client from Ireland. We have been to Birendra taal at the altitude of 3630m/11840 feet, as a part of our acclimatization hike. Acclimatization is trekking uphill to gain certain height and sleep lower,in general.

This lake is named as Birendra Taal because, in the past – when there was royal family in the power – one of the Nepali King by the name of Birendra came here and swim in this lake. That’s what the reason is, behind the name of the glacial lake is named as Birendra Taal. This lake is by the trail to Manaslu base camp from Samagaun – from where people hike to Manaslu Base camp, for the purpose of expedition of Mt Manaslu.

Expedition to Mt Manaslu is considered dangerous as very few people are successful in the move to the summit of Mt Manaslu 8164m/26615 feet high.

Guest are happy today, after getting back from the lake and this is how they got helped in the acclimatization on purpose of trekking over the larkey pass. Larkey pass is under a huge discussion issue when we ate lunch at sama Gaun, because of heavy snowfall in the village of sama. We have seen the update of the weather forecast and this says; tomorrow is heavy snow shower.

But still, we decided to go to samdo village by tomorrow and then stay overnight at samdo. From samdo we planned to do the Larkey Pass. – it fits in our itinerary if we skip one night at Dharmashala. And in the mountain weather, we are compelled to obey as the weather says and what our itinerary fits with? For the major concern we are now decided.

Sitting on the side of the fire, and talking with some people from film shooting crew seems satisfying environment for our guest; and briefed them about the decision. Nepali shooting crew are here at samagaun for shooting of Nepali film, with the story from the mountain life, it interest our clients, with this we got free time to explore the village of samagaun.

Exploring the village of Samagaun

After the lunch, our guest were exploring the village and I did the same, what I found in the exploration is about all the thatched houses, Yaks, red chick child with bare hand and beautiful smile. The red chick is because of the cold weather and they don’t cover their face and do not use sunscreen. But the red chick of children and the young local ladies fancy in their cultural dress is nice to see.

People filling the water pot in the frozen tap and chilled environment was different experience. Snowfall of yesterday in samagaun village has made the landscape more beautiful and picturesque. Yaks, Cows,  pet Dogs are everywhere and I have seen very less people in the street but seen some of the men grouping and sitting by the side of the fire and chatting on their own dialect, drinking soup / cup of tea or might be local alcohol called “Raksi”.

Raksi is local wine but it doesn’t really have taste, though this local drink of himalaya makes the body warm in the cold weather.

Coming to the end, we can say that village surrounded by all the beautiful landscape and Mt manaslu worth spending one extra night in the name of acclimatization. Do it, it’s good for you and good for spending a day with villagers in this big village of the Manaslu trekking circuit before Larkey Pass. 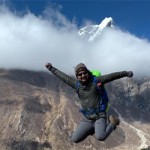 Looking for a quote or PRICE?

Ask ANY Questions You May Have!